A trip to Moscow without a metro card is truly incomplete. The breath taking artworks, carvings, illustrations of war and memoirs constituting the metro stations of Moscow are a must watch for every tourist. Here is a brief description of the important stations of Moscow that you should explore whenever you visit.

Recommended Line If you have less time: Circle Line, since most of them available in this line, followed by Green or Blue line

Mayakovskaya Metro Station (Green Line)
Mayakovskaya Metro station on the Zamoskvoretskaya Line.
Situated on the line Zamoskvoretskaya of district Tverskoy, it is a great structure depicting architectural form before second world war. It has an island platform, a vestibule, columns of pink rhodonite, mosaics on the ceiling which were themed as the 24 hour Soviet sky and sculpture of stainless steel. It was used as an anti aircraft regiment during second world war. 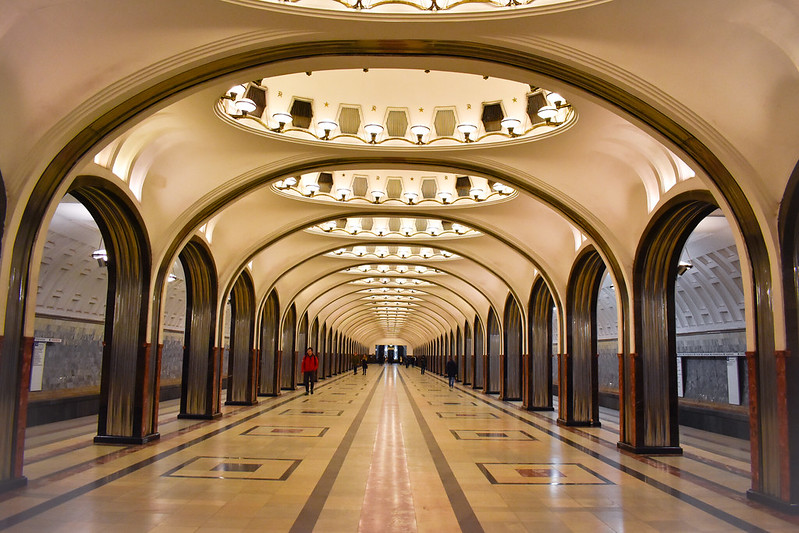 Elektrozavodskaya Metro Station (Blue Line)
Situated on line Arbatsko-Pokrovskaya, it has some spectacular works by architects like Vladimir Shchuko and Vladimir Gelfreich. There is a central hall, escalators and renowned artworks making this metro station well known. The station has a hexagonal shaped area. The depiction of pre war art and post war art is worth a watch. 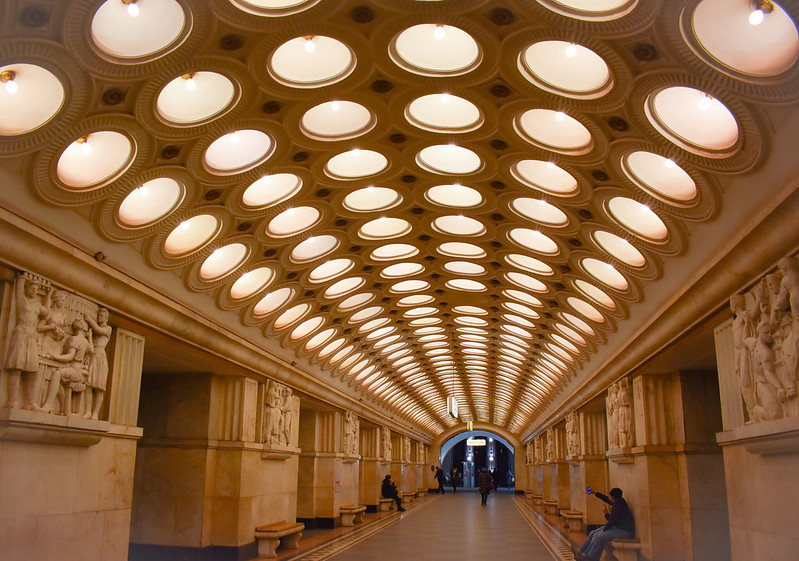 Komsomolskaya Metro Station (Circle Line)
It is also known as Koltsevaya Line. Situated in district Krasnoselsky in Okrug, it connects Prospekt Mira station with Kurskaya station. It has a deep column structure located amidst one of the busiest transport hubs of Moscow. With ravishing war memoirs and illustrations, it stands as Shchusev’s only designed metro station. 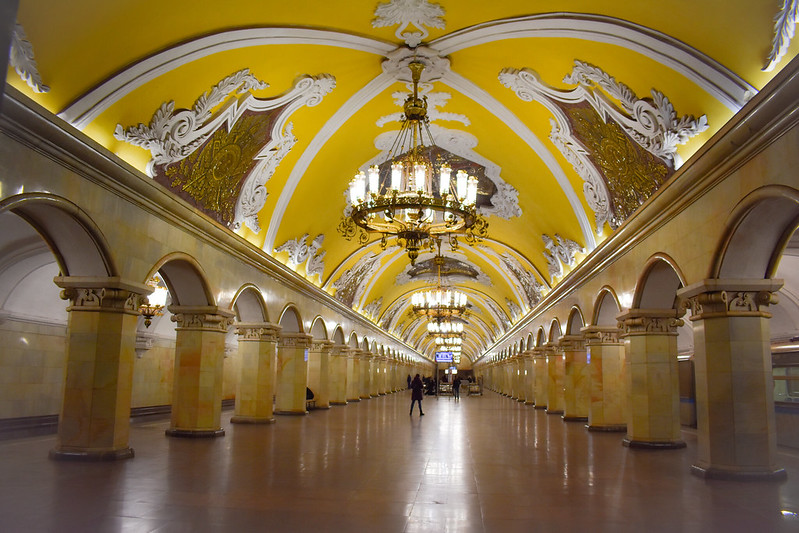 Park Pobedy Metro Station (Blue Line)
Situated in district Dorogomilovo on two lines, that are, line Arbatsko-Pokrovskaya and line Kalininsko-Solntsevskaya, it is one of the deepest metro stations worldwide. Moscow’s deepest metro station, it has two island platforms, deep pylon with tri span, artworks, clocks, vestibular area at the entrance and mosaics. A landmark in architecture and art, it is a must watch whenever traveling to Moscow. 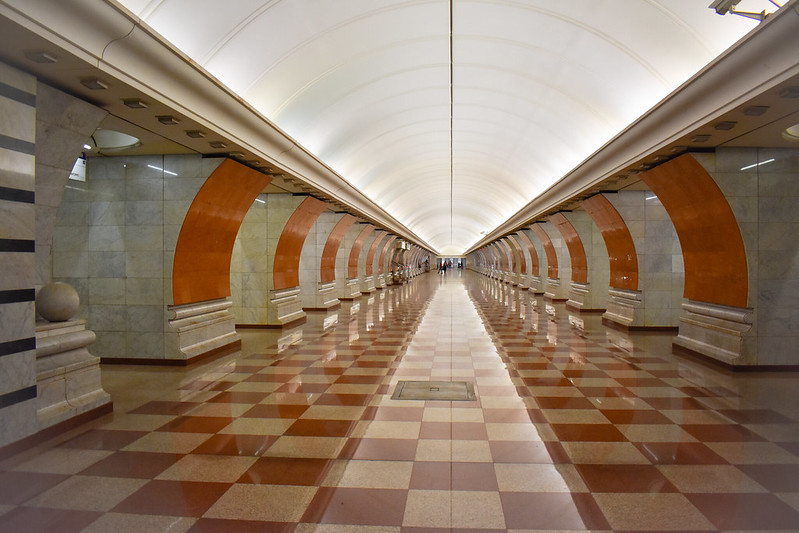 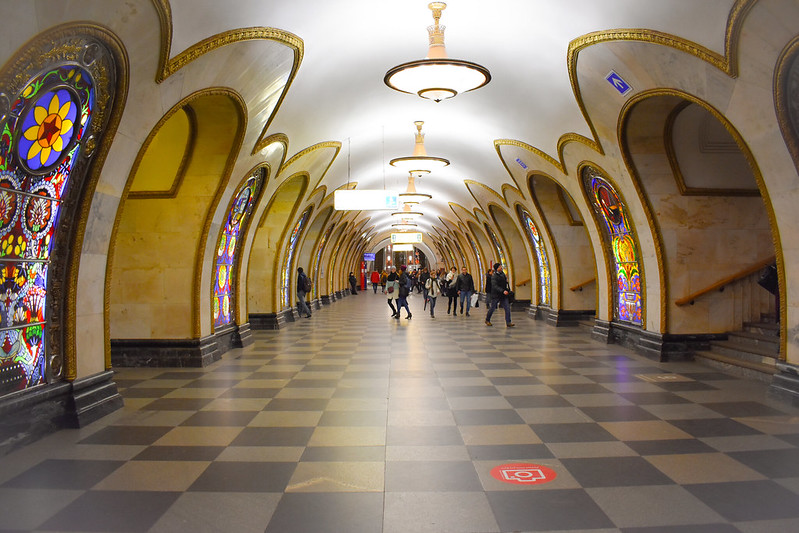 Ploshchad Revolyutsii Metro Station (Blue Line)
Regarded as one of the most famous stations present in Moscow, it is located in district Tverskoy in central Moscow. The metro station consists of over 70 bronze sculptures and incredible ceiling traceries. It was named after revolution square and is present on line Arbatsko-Pokrovskaya. 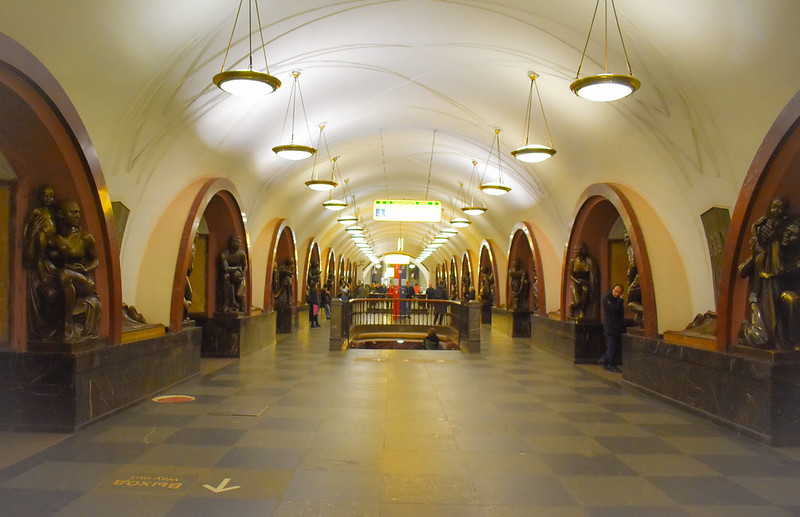 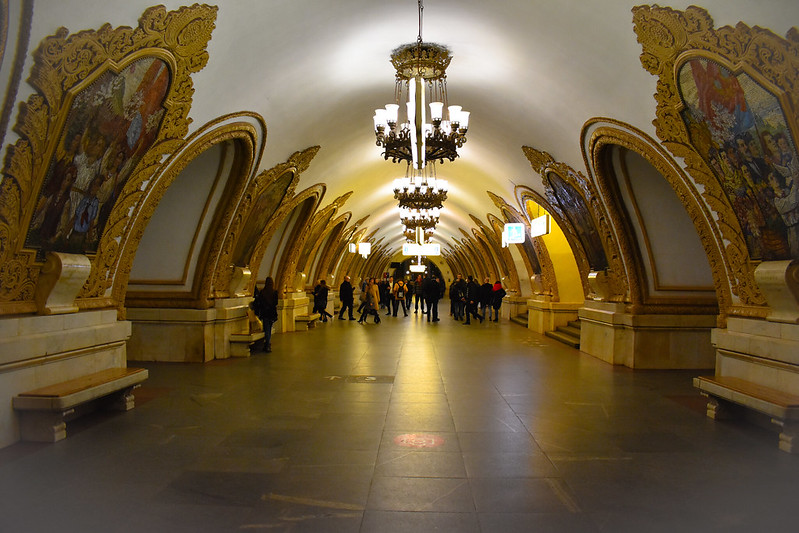 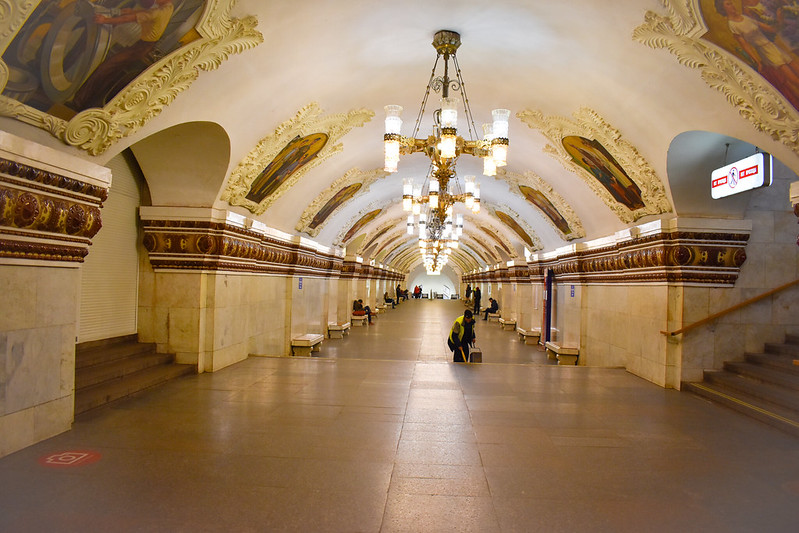 Prospekt Mira Metro Station (Circle Line)
A station of Koltsevaya Line, it’s an underground subway designed by the famous architects Mikhail Minkus and Vladimir Gelfreykh. A pylon station having an island platform, it has a chessboard pattern on the floor and chandeliers on the ceiling. It was earlier called as Botanichesky Sad is indeed an exquisite example of art. 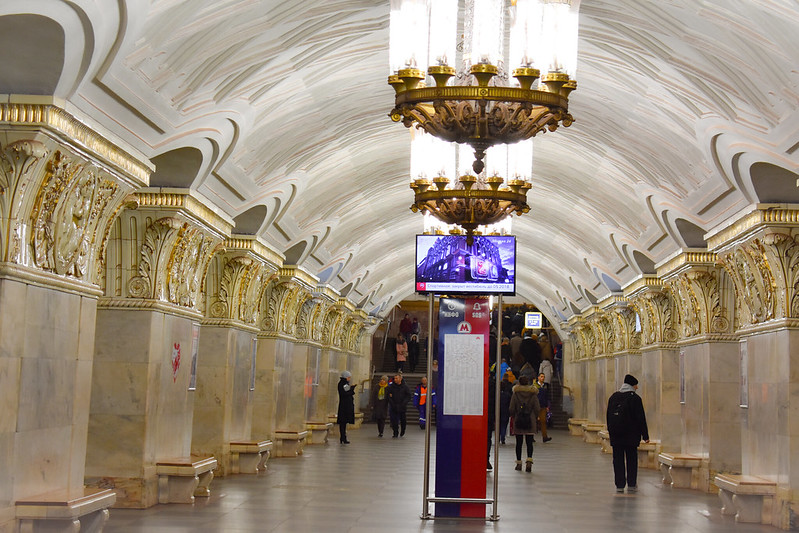 Arbatskaya Metro Station (Blue Line)
Located on the line Arbatsko-Pokrovskaya, it is a pylon station that was destroyed by German bombing and renovated with far larger and deeper design. It has an elliptical tunnel, the ceiling is high and decorated with chandeliers, brackets and floral designing. This station’s part was shown in the movie Resident Evil: Retribution. 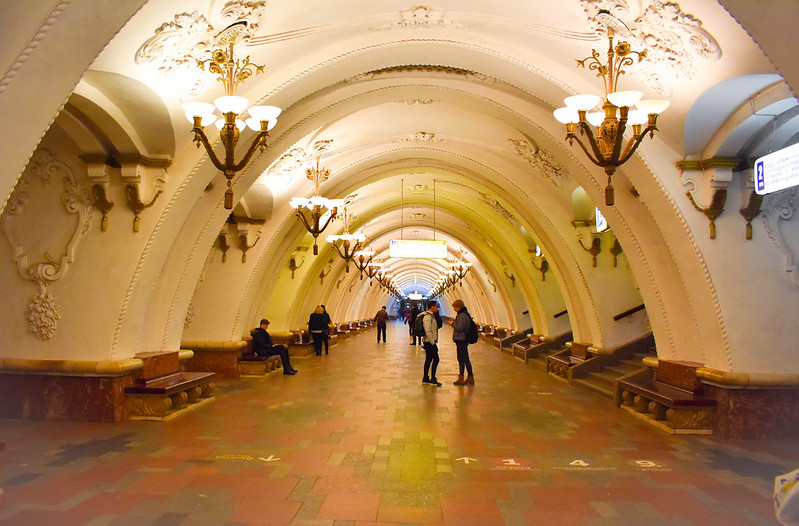 Belorusskaya Metro Station (Circle Line)
Located on line Zamoskvoretskaya, it has been designed by architects Nadezhda Bykova and Ivan Taranov. Consisting of bronze floor lamps, a bust of Vladimir Lenin in the central hall, staircases and pylon niches, the metro station is a marvelous model of art. 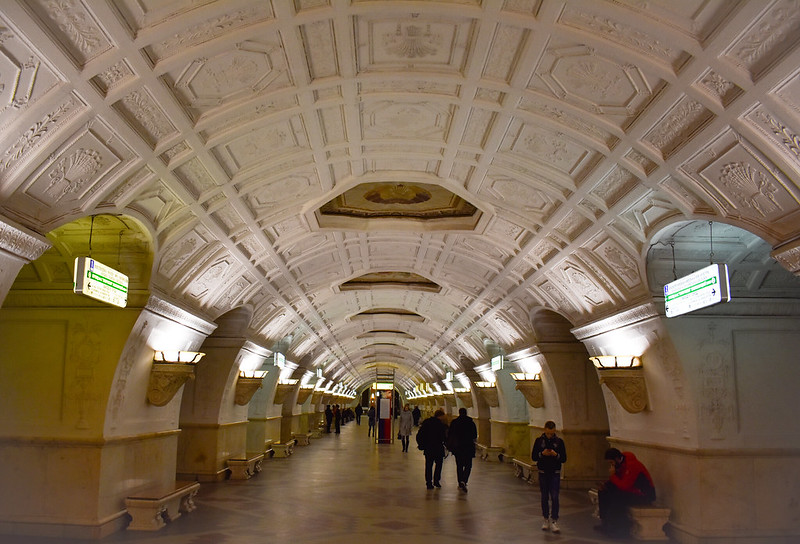 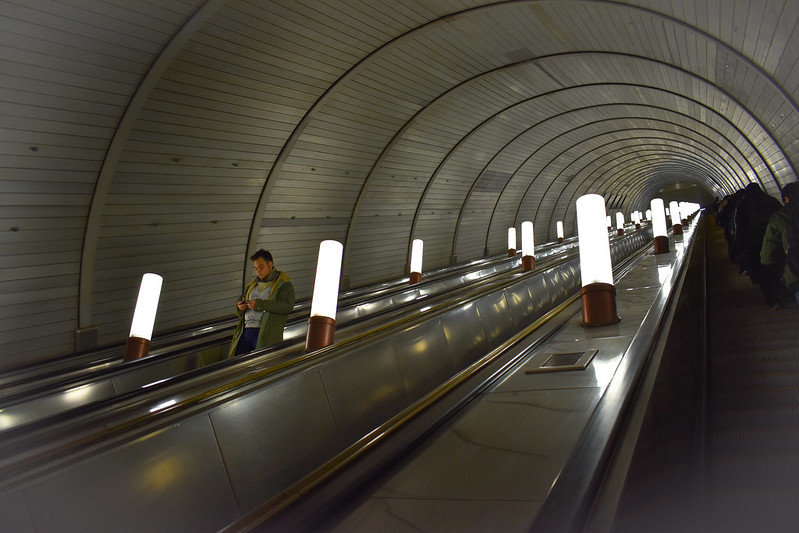 Do you want to know “How to Travel the World for Free“?

If you have found any other beautiful metro station in Moscow, do leave comment